The US coronavirus toll surpassed 500 on Monday as the total number of cases went past 41,000 and fifteen states went into various forms of lock-down.

The death toll from the virus in America is now 576, a sharp rise of more than 100 people in one day. Experts say the spike is yet to come and that the current state of crisis will last for another several months, at least.

President Trump is yet to mandate a national lock-down because the problem is worse in some states than in others.

Michigan, Massachusetts, Indiana, Oregon and West Virginia were the latest states to tell residents to stay at home and the city of Denver is urging its resident to.

Now, fifteen are under stay-at-home rules. New York and California were the first, along with Washington state.

New York is by far the worst affected state in the country, with more than 20,000 of the cases in the US occurring there. An astonishing 12,000 are in New York City.

Gov. Andrew Cuomo said the worst was yet to come and that we were currently in the ‘calm before the storm’. 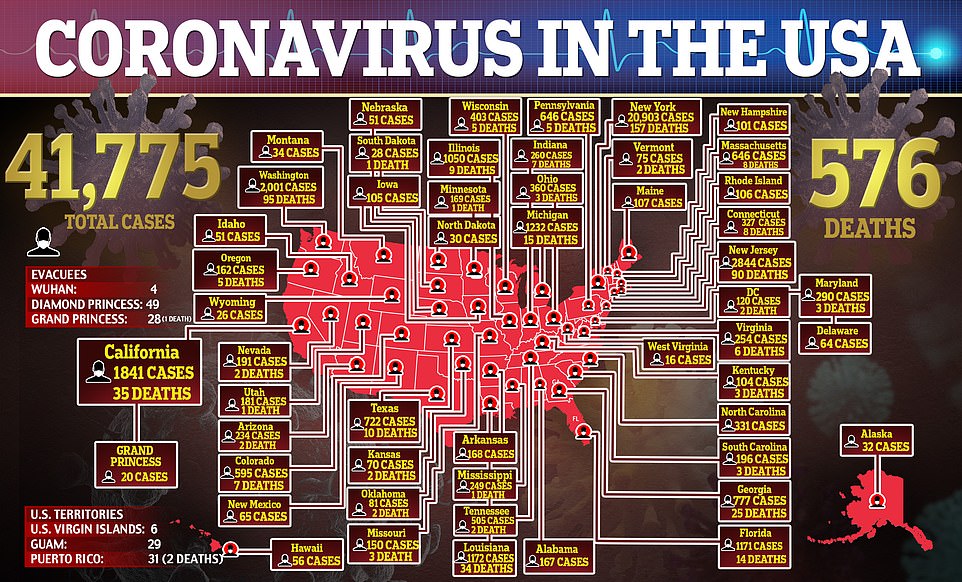 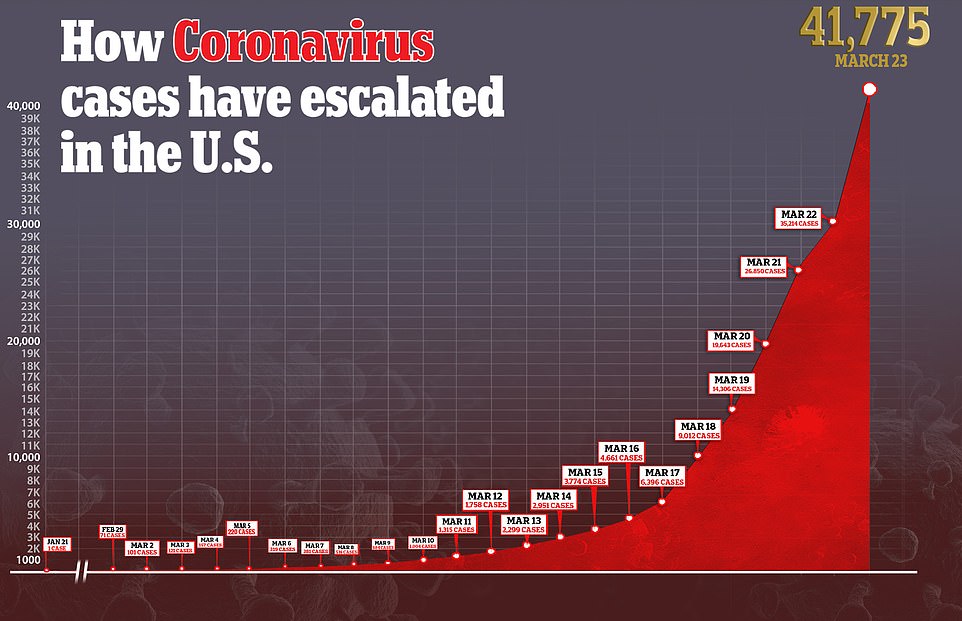 The states are now urging President Trump to enact the Defense Production Act to instruct private companies to manufacture the medical supplies and equipment that the country desperately needs.

He is resisting and is instead trying to make deals with the private sector which involves them putting together their own set of plans and commitments to address the crisis while still being able to thrive as independent enterprises.

The president has also suggested that he will re-assess the national rules – to stay inside as much as possible and wash your hands – in 15 days.

The Surgeon General has said already he does not believe it will ‘likely’ be enough.

In New York, Gov. Cuomo said the crisis could last another ‘several’ months. He is urging Americans to ‘settle in’ to the current state of quarantine and to  get used to it.

On Monday, Michigan Gov. Gretchen Whitmer, closed all businesses that are ‘not necessary to sustain or protect life.’ 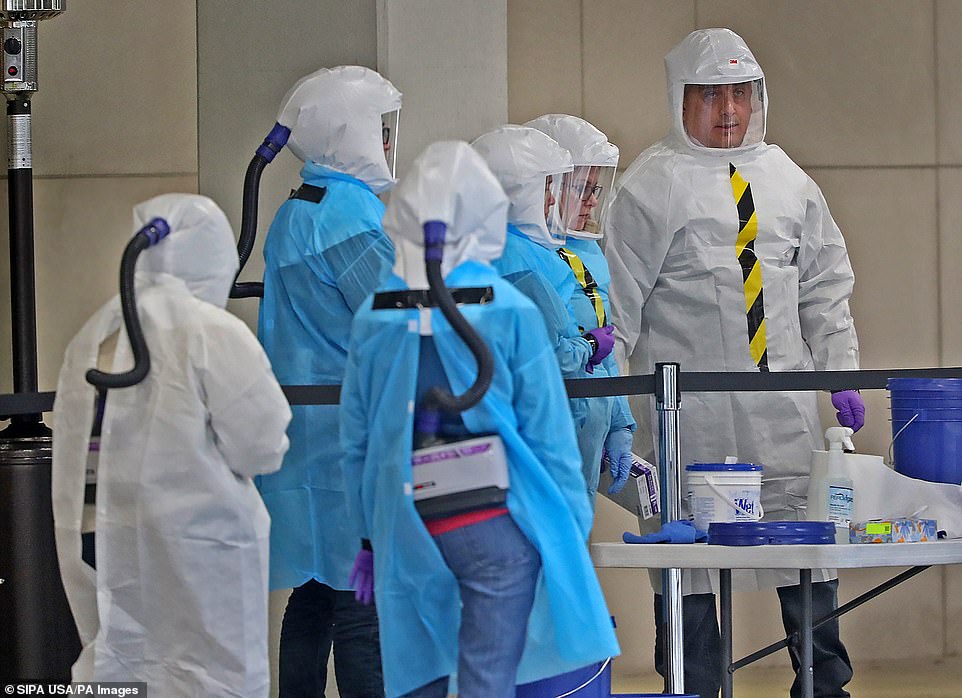 This disease can’t spread from person to person if we’re not out there.

‘Right now, too many people are still out and about unnecessarily, so we must do more.

‘If we all come together, get serious, and do our part by staying home, we can stay safe and save lives,’ she said.

Massachusetts also issued a stay-at-home order to its 7million residents.

‘These aggressive social distancing measures put in place today are designed to give public experts the time they need to ramp up additional steps that must be taken to effectively push back the virus,’ Gov. Charles Baker said.

West Virginia has also issued a stay-at-home order. It was the last state to report a coronavirus case. Governor Jim Justice however is implementing the  order starting Tuesday night.

‘From the standpoint of cases, as of last night we had 16 positive cases in our state,” Gov. Justice said. “One of those cases is a lady in a nursing home.

‘This is the first case we’ve had of community transmission and so this is really significant,’ he said.

Indiana Gov. Eric Holcomb told his constituents: ‘I’m telling you, the next two weeks are critical — that’s March 24 through April 7 — if we’re going to slow the spread, and we must slow the spread.’

‘It’s going to get bad’: Surgeon General urges Americans to ‘come together as a nation’ to fight coronavirus as former national security adviser says NY’s numbers will continue to grow for 6 WEEKS – and the next 2 weeks will be the worst spike 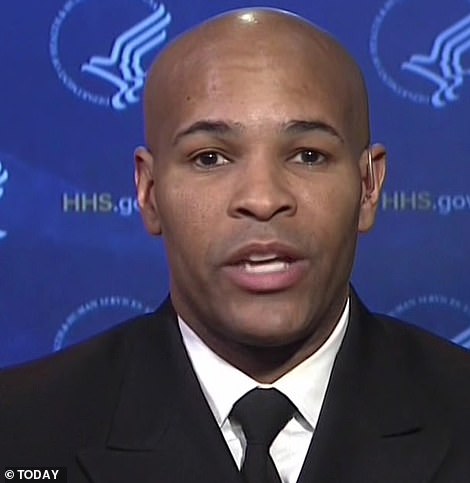 The Surgeon General has urged the nation to ‘come together’ to fight coronavirus and warned: ‘This week, it’s going to get bad’ in a plea to the public to stay indoors and stop spreading the deadly disease.

Dr. Jerome Adams appeared on Today on Monday morning to tell young Americans who are still going out and socializing despite being warned to stay indoors and distance themselves by 6ft.

He fumed over the number of people still going out in large groups and referred to the shocking number of crowds he saw in Washington DC via a webcam set up for people to virtually enjoy the famous cherry blossom blooms.

‘I want America to understand. This week, it’s going to get bad. We really need to come together as a nation. You’re seeing young people out in beaches – here in DC.

‘We really, really need everyone to stay at home. I think there are a lot of people who are doing the right thing. But unfortunately we’re finding out a lot of people think this can’t happen to them.’

Dr. Adams said the US demography is younger than other countries. Nearly 30 percent of the cases were among people under the age of 45.

‘The demography seems to be very different in the US versus in other countries. There are theories that it could be because we know we have a higher proportion of people in the US and also in Italy who vape – we don’t know if that’s the only cause.

‘Most importantly, you can spread it to your loved ones.

‘We need you to really lean in. That’s why I reached out and I want to give a shoutout to Kylie Jenner who really stepped up last week and sent out a message,’ he said.

Dr. Adams also said the figures in New York – where there are more than 12,000 cases of the virus, more than five percent of the total cases in the world – reflect ‘what happens two weeks ago’.

‘We don’t want Dallas or New Orleans or Chicago to turn into the next New York and it means everyone needs to be taking the right steps right now and it means stay at home.’

State and city leaders have revealed that they are having to bid against each other for crucial medical supplies like ventilators and surgical masks because Trump won’t put into action the Defense Production Act which would steady prices.

On Monday, New York Gov. Andrew Cuomo led a chorus of leaders asking Trump to start nationalizing the system to allow the federal government to buy the supplies then distribute them fairly to where they needed to be.

In order to do that, Trump must tell the manufacturers behind the supplies to make what the country needs, then buy them from them and divvy them up.

He has not yet done that, saying he does not – as the president – want to interfere with businesses and their freedoms to produce what they see fit for the market.

On Sunday night, he said: ‘We’re a country not based on nationalizing our business. Call a person over in Venezuela. 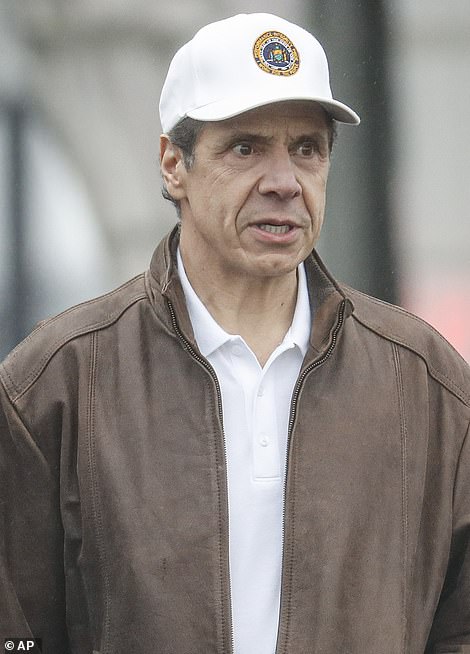 New York Gov. Andrew Cuomo and Illinois Gov. J. B. Pritzker have complained about the bidding war they are in for vital equipment

‘How did nationalization of their businesses work out? Not too well.’

According to The New York Times, he has been advised against it by the Chamber of Commerce which believes businesses need to be able to remain nimble and able to adapt – without being subject to government restrictions – during such uncertain times.

But governors and mayors are crying out for it, saying they are being priced out of getting what they need.

Cuomo revealed that N-95 masks – which cost 85 cents to buy before the pandemic – are now being sold for $7, an increase of 823 percent.

‘Can I say that we’ll have enough equipment for next week? The week after? I can’t say that, and that’s out of our control. That’s where we’re going to need the federal government. 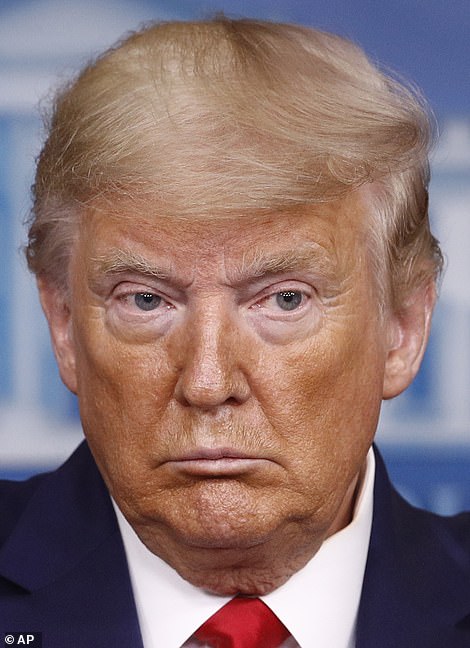 ‘To have states competing with other states, to find these equipment, bidding against other states, driving the price up, masks that we paid 85 cents for we are now paying $7. Why? Because California is bidding, Texas is bidding, Illinois is bidding, it makes no sense.

‘The federal government much nationalize the equipment production and supply issue,’ Cuomo said.

‘I’ve been hearing stories last few days from my Emergency Management team where they expected millions of masks to come in and they had to tell me that somehow we got outbid somewhere else in the world and they’re going someplace else.

‘The price gouging that’s happening here and, bluntly, the opportunism by some, is disgusting.

‘So, there’s not now a national mechanism for ensuring and there has to be. And I talked to the president, vice president about this.

‘There has to be a national intervention by the federal government to say, okay, here is the place first that needs the ventilators and the masks, here’s second, here’s third.

‘And that’s where they’re going to go. Not an open market based on who can spend the most money and make the quickest deal.

New York is at least are at the top of the list to receive supplies because it has the highest number of cases in the US.

‘The price gouging that’s happening here and, bluntly, the opportunism by some, is disgusting.

‘So, there’s not now a national mechanism for ensuring and there has to be. And I talked to the president, vice president about this.

‘There has to be a national intervention by the federal government to say, okay, here is the place first that needs the ventilators and the masks, here’s second, here’s third.

‘And that’s where they’re going to go. Not an open market based on who can spend the most money and make the quickest deal.

New York is at least are at the top of the list to receive supplies because it has the highest number of cases in the US.

© www.mikrometoxos.gr
We use cookies on our website to give you the most relevant experience by remembering your preferences and repeat visits. By clicking “Accept All”, you consent to the use of ALL the cookies. However, you may visit "Cookie Settings" to provide a controlled consent.
Cookie SettingsAccept AllReject All
Manage consent

This website uses cookies to improve your experience while you navigate through the website. Out of these, the cookies that are categorized as necessary are stored on your browser as they are essential for the working of basic functionalities of the website. We also use third-party cookies that help us analyze and understand how you use this website. These cookies will be stored in your browser only with your consent. You also have the option to opt-out of these cookies. But opting out of some of these cookies may affect your browsing experience.
Necessary Always Enabled
Necessary cookies are absolutely essential for the website to function properly. These cookies ensure basic functionalities and security features of the website, anonymously.
Functional
Functional cookies help to perform certain functionalities like sharing the content of the website on social media platforms, collect feedbacks, and other third-party features.
Performance
Performance cookies are used to understand and analyze the key performance indexes of the website which helps in delivering a better user experience for the visitors.
Analytics
Analytical cookies are used to understand how visitors interact with the website. These cookies help provide information on metrics the number of visitors, bounce rate, traffic source, etc.
Advertisement
Advertisement cookies are used to provide visitors with relevant ads and marketing campaigns. These cookies track visitors across websites and collect information to provide customized ads.
Others
Other uncategorized cookies are those that are being analyzed and have not been classified into a category as yet.
SAVE & ACCEPT
Posting....