Valuation tends to rise during economic crises as earnings collapse. But with the forward PE already at 25, how much higher can it go for the S&P 500 Index… 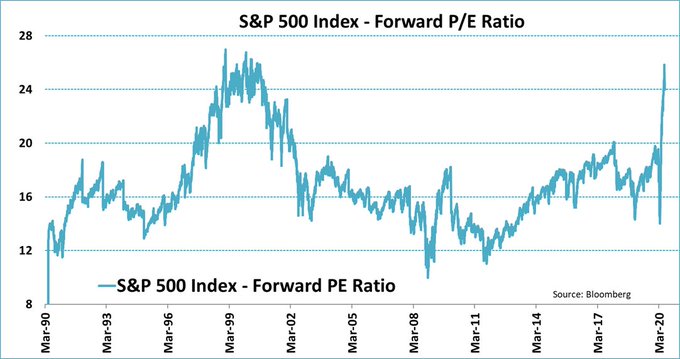 BREAKING! US retail sales rose 17.7% in May, more than double the number expected. 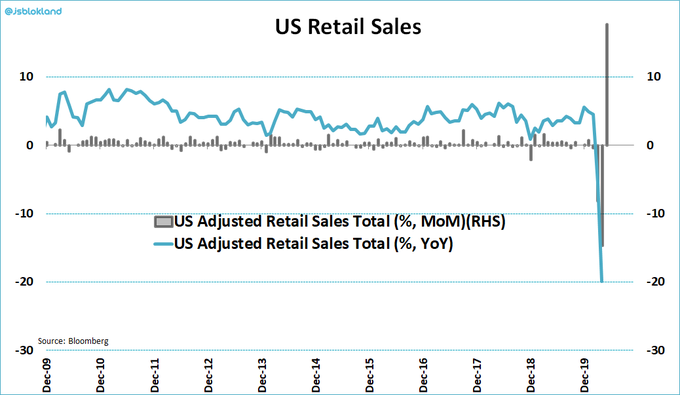 Stocks ended slightly higher, as some selective midway through the session reversed early losses. Europe was in the same trading pattern. Fears over coronavirus resurgence have triggered profits taking across Europe, at the moment when countries begin opening up after lockdowns. Greece opened skies On Monday for tourists from 29 countries with international flights to and from the country’s main airports restarting.

Bounce across the board in major exchanges supports a positive sign in today’s session.

Greece/Budget Execution: Greece’s state budget posted a primary deficit of €4.8bn in the January-May period, falling short of the initial target which was for €43mn in surplus. The state’s support measures to mitigate the impact from the coronavirus pandemic were responsible for the deviation. Still, the Finance Ministry said that tax revenues were €300mn above the updated target as submitted to the EU in April, incorporating the impact relief measures.

May tax revenues reached €2.bn, down €1.1bn compared to the monthly budget target. However, they were down just €219mn compared to the updated targets as included to the Stability Program. Public Investment Budget revenues stood at €1.3bn, €117mn above the budgeted target, while state spending amounted to €23.5bn, €2.3bn above target, due to COVID-19 related payments and higher Public Investment Budget spending.

Greece/Building Activity: Total building activity surged in March as the number of new building permits firmed 10% y-o-y which corresponded to 56% higher volumes, the statistics office or ELSTAT said. Issued permits amounted to 1.305. In the January-March period, new permits advanced 43% while volumes were 57% higher.

AthEx/FTSE: Following the updated capping factors methodology for shares that exceed 10% weight in FTSE, AthEx announced yesterday the capping factors that will be valid as of the close of Friday June 19. Specifically the new factors are: CHBC 0.3133, OTE 0.5028, OPAP 0.8217 and Jumbo 0.8859.

Greece/Privatizations: A casino and two hotels being planned for the landmark plot of Athens’ former international airport on the southern coast at Elliniko will be ready for business by 2024, Investment Minister Georgiadis said on Monday. Speaking to state broadcaster ERT, Georgiadis said that construction activity will officially begin at the plot – which represents one of the country’s biggest privatization projects – in early July and will be inaugurated by Prime Minister Mitsotakis.

Fourlis: Retailer Fourlis said that the January-April sales dropped by around €48mn compared to the year-ago period, while May top-line was 15% lower y-o-y. As for June, the retailer expects sales to settle at last year’s levels. Fourlis said the company has already launched its Intersport e-shop in Cyprus and Turkey and it is about to introduce Intersport online in Romania and Bulgaria this week.

COCA COLA HBC: As of today the listing of 321,527 new (CR) shares following the recent share capital increase due to the Stock Option Plan commences.

Disclaimer: Beta Securities S.A.
This e-mail is confidential. If you are not the intended recipient, you
should not copy it, re-transmit it, use it or disclose its contents, but
should return it to the sender immediately and delete the copy from your
system.