My objection to Bitcoin

My objection to Bitcoin was Buffett’s objection to gold: it’s not a productive asset. Stocks have earnings, bonds have interest, real estate generates rents. Heck, chickens lay eggs. Bitcoin, like gold, just sits there. So I could never figure out where the demand for this asset was going to come from: who wants to own an electronic currency? I could see it being useful to the mafia, or to Chinese millionaires trying to smuggle wealth out of China, but those seemed like marginal sources of demand in the scheme of things.

Bitcoin enthusiasts typically emphasize the limited supply of Bitcoin. Only 21M bitcoin can be created; 18M already exist. But what good is limited supply if there is no systematic demand? Stocks of companies are in limited supply but they don’t all go up.

I was a Bitcoin skeptic but, more than I believe any theories of mine about Bitcoin, I believe prices in a free market are set by supply and demand. Supply of Bitcoin is approximately fixed, so price varies with demand. And there is this chart:

So my theory was wrong. Somewhere, somehow, demand for Bitcoin was increasing. It doesn’t have to make sense. It just has to be real.

Where is the demand coming from?

The short answer is, Bitcoin is moving from niche interest to the mainstream. But… no kidding. Why?

Economists tell us money has three functions. Money is a medium of exchange: but while some merchants will take it, bitcoin has not become widely adopted, nor is it likely to be. This is because fees are too high, and transactions take too long to confirm, for bitcoin to replace ordinary fiat currencies.

Money is a unit of account: but nobody is keeping their books in Bitcoin, and they are not going to start, because it’s a terrible medium of exchange.

Bitcoin is going mainstream, instead, as a store of value. It is becoming digital gold, an asset people are willing to hold to protect against inflation or just for diversification. Bitcoin is, indeed, impervious to inflation, although it’s plenty volatile for other reasons. The other reason more people are holding Bitcoin these days is for speculation. They think other people want to hold Bitcoin.

They are right! Although even a year ago, Bitcoin didn’t have much institutional interest, in 2020 Stanley Druckenmiller, Paul Tudor Jones, and Kevin Leary have expressed an interest in holding a small percentage of their net worth in Bitcoin. One percent of their net worth is more than six days’ supply of mined Bitcoin. Ray Dalio is open to Bitcoin.

Major investment brokerages – Fidelity, Vanguard, and Schwab – are investing in Bitcoin miners. Fidelity is dipping its toe in other ways too. They wouldn’t be going there unless their clients were demanding it. Robinhood allows its users to invest in Bitcoin. S&P Dow Jones is putting together a cryptocurrency index.

How to value Bitcoin

Since Bitcoin is not a productive asset, its value lies in other people’s willingness to hold it. This sounds like “greater fool” theory… but it’s the same reason people value gold or US dollars. In different terms, Bitcoin (and gold and dollars) gain value from network effects: the more people willing to hold them, the more valuable they are. It is hard to put a number on this, but according to Metcalfe’s Law, the value of a network is proportional to the square of its size. (More explorations of this theme here.) In fact, a graph of Bitcoin’s price tracks pretty well with the ratio of the active Bitcoin addresses, squared, to the number of Bitcoins in circulation. (The idea here is that addresses squared is an index of the value of the network; divide by the number of Bitcoins to get an index of value for individual coins.) 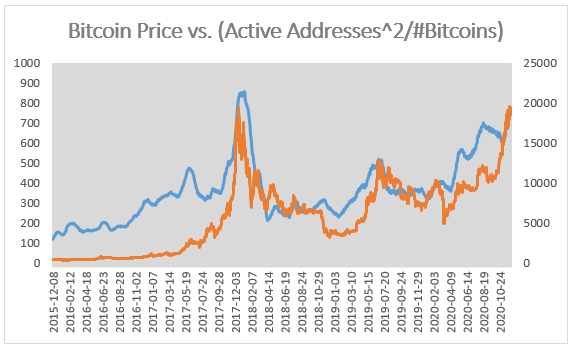 I don’t think this graph puts a value on Bitcoin, but it suggests that today’s price is not out of the realm of reason. If the number of Bitcoin holders increases, the graph suggests that the price will increase as well.

So is Bitcoin a good investment now?

Here is where I have not changed my view: for purposes of diversification or defeating inflation, no. Bitcoin is still not a productive asset. It does not create earnings, or pay interest, or generate rents, or lay eggs. There is no inflation on the horizon:

If you are worried about inflation for some reason, I would suggest stocks or real estate. In the sense of value where value is the discounted present value of future cash flows, I still don’t think Bitcoin has any value.

But as a speculative asset, I now believe Bitcoin is a good long-term investment. In the sense of value where value is what someone else will pay for an asset, Bitcoin has value now and will in all likelihood have more value later. This is because it is going mainstream: more people want it, which means institutions are getting interested. Network effects generate the demand, and we are probably in the beginning stages of that ramp.

Here is where the supply of Bitcoin is relevant. Only 21M Bitcoin can ever be created, and about 18M exist now. At today’s prices, only $55B of Bitcoin have yet to be created. Given the burgeoning interest in the asset, that is peanuts, and over time the price will have to rise. Price targets are not worth much, but Bloomberg suggested $50,000 in 2021.

As a speculative asset, Bitcoin is a good long-term bet. Short term, not so much. There is a terrible technical picture to overcome, before we hit a good entry point. I will also say something about sentiment indicators. First, the technical picture:

Three years ago, Bitcoin peaked at just under the psychological landmark of $20,000/Bitcoin. It is bumping up against that resistance now, hitting a new all-time-high just briefly on Nov 30, now trading about $1000 lower. Technically, the 2017 peak is long term, strong resistance, immediately backed by a psychological barrier, and Bitcoin will probably bounce off it a few times. If you are interested in accumulating, wait for the dips.

Where are the dips? One of the few ways to invest in Bitcoin from an ordinary brokerage account is through Grayscale Bitcoin Trust (GBTC), a closed-end fund backed by Bitcoin. Investors have been willing to pay a premium over NAV for the privilege, historically between 6% and 30%. The GBTC premium is a decent measure of sentiment and a contrary indicator; 30-day returns at peak premia are negative. Currently the premium sits at 16%.

That is not terrible, and a lot better than the 30% premium people were paying a few days ago. On the other hand, it’s not great either.

Bitcoin remains a highly volatile, highly speculative asset. I have suggested that its value is likely to go up as mainstream adoption increases. But there is no guarantee that this will happen. One particular risk is that people are interested because Bitcoin has made a lot of money recently. Looking at my “valuation” chart, active addresses decline when the price declines.

The last leg of the present run-up began Oct 21, the day PayPal allowed its users to trade Bitcoin. If the shine fades, and PayPal and Square users leave the ecosystem, the price could fall again.

Bitcoin is also bumping up against stiff resistance. Finally, as we saw in March, in a crash, all correlations go to 1. Bitcoin will fall along with everything else.

Personally, I think Bitcoin has rounded the corner of mainstream acceptability and is on its way to complement gold as an asset. Among digital-native millennials and zoomers, who have no memory of gold-backed monetary systems, Bitcoin could replace gold. The limited supply of Bitcoin, combined with potentially explosive demand, means that the price will go higher. I believe that a decent speculative play is to ride that wave. Personally, I don’t think Bitcoin needs to be in a portfolio for any other reason.

At the same time, I do not like the current entry point at all, and will be waiting to accumulate.

You can invest in Bitcoin through GBTC, through a broker like Coinbase (COINB), through Square’s Cash App, and soon through many other avenues as well.

Disclosure: I/we have no positions in any stocks mentioned, and no plans to initiate any positions within the next 72 hours. I wrote this article myself, and it expresses my own opinions. I am not receiving compensation for it (other than from Seeking Alpha). I have no business relationship with any company whose stock is mentioned in this article.